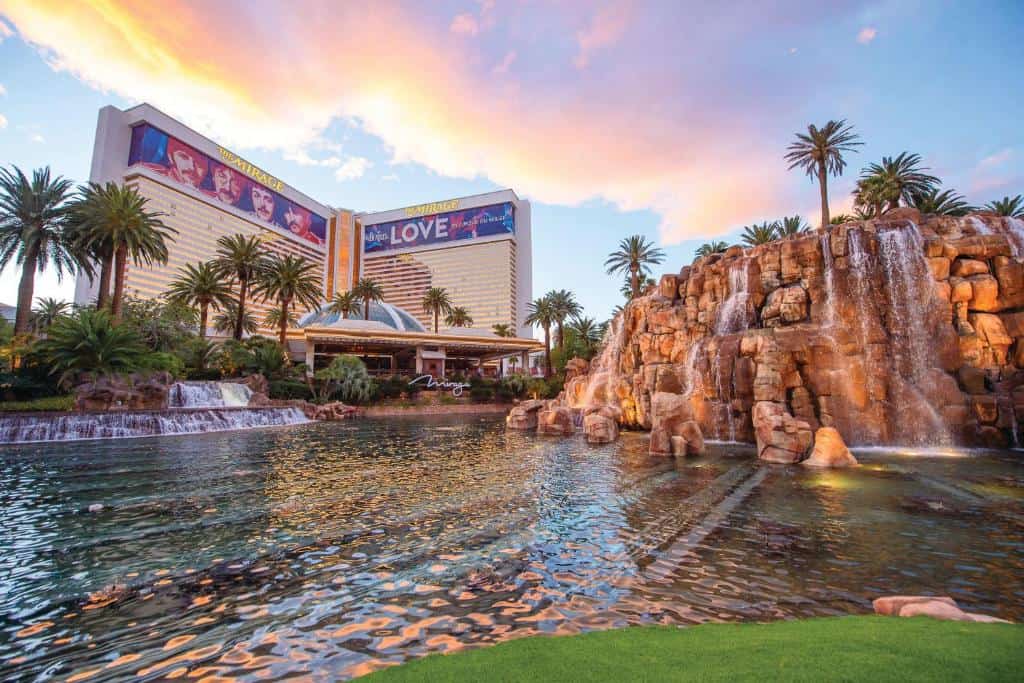 The Mirage Hotel and Casino

The Mirage was born the strip was completely unrecognizable to the strip it inhabits today, and the resort is largely credited with establishing the modern Las Vegas.

When Wynn needed the funds to build his new resort whether risky or not, he decided to sell the Golden Nugget Atlantic City and use the proceeds to pay for construction securing $440 million cash from which he was focused on building something that Las Vegas had never seen before.

The new Mirage resort centered around a Polynesian theme. 10 acres of landscaped lawns and pools would surround the main structure.
Famous for being one of the strip’s first main tourist attractions. An erupting volcano several waterfalls and a plethora of exotic plant life and a stunning aquarium.

Steve Wynn said to think of the harsh Southern Nevada desert and then you see a waterfall, it’s not supposed to be there and that was the intention to create a Mirage.

With 300 slot machines and 115 table games. The construction cost was $630 million it became the most expensive hotel and casino ever built at the time.

Before the first hour was out someone had already hit a $4.6 million jackpot on a $1 slot machine.

Was It Just a Mirage?

Mirage/Hard Rock. As the Mirage changes owners and transitions over from MGM to the Hard Rock. The Mirage name could stay for up three years.
It’s sad to see Vegas change so quickly! It’s cool for residents on one level but if you live abroad usually by the time you gained an interest in a place or subject Vegas has demolished it!

From an outsider’s point of view being partly British. I would like to see Las Vegas icons not confined to the Neon Boneyard. The Mirage hotel and casino released a statement at the end of October stating that they will officially become the Hard Rock on December 19th, 2022.

If you see The Mirage after this date you must be highly intoxicated or drunk. Or perhaps it was just a Mirage? An optical illusion caused by atmospheric conditions, especially the appearance of a sheet of water in a desert or on a hot road caused by the refraction of light from the sky by heated air.