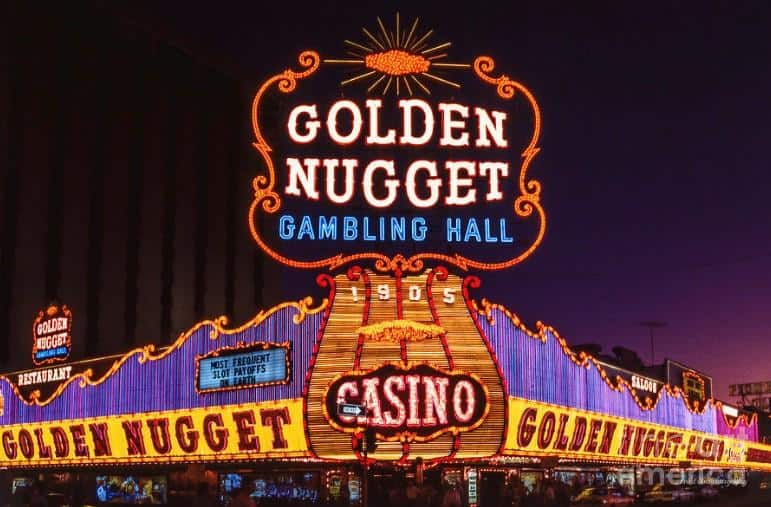 The Golden Nugget is one of the oldest gambling halls in Las Vegas and has many claims to fame. Being situated on the famous Freemont St it’s in one of the few old parts of Las Vegas. Located downtown within today’s Fremont Street Experience.

You can find it in Las Vegas at 129 E Fremont Street. The Golden Nugget is one of the oldest casinos still open in Las Vegas and could possibly be the oldest you know standing downtown it originally opened in 1946 and was opened by guy McAfee.

McAfee announced that he wanted to build his dream property which would be called the golden nugget saloon and it was said to be the largest casino in the world. You will find this an everyday statement in Las Vegas history.

The Golden Nugget iconic sign was put up in 1949 and is one of the oldest in operation.
It was just before the start of what’s known as mob-era Las Vegas which will bring us to The dunes, The Sands, The Riviera, El Rancho, and The Flamingo Las Vegas.
Vegas pioneer Steve Wynn in the 70s took The Golden Nugget to a whole new level. Merely a former slot supervisor at the Frontier who had bought a controlling stake in the Golden Nugget.

In 1977 the golden nugget opened its very first hotel tower bringing a place for people to stay in downtown Las Vegas, and it was the first resort awarded an A4 diamond rating by the Mobile Travel Guide in 1982. Frank Sinatra advertised in the commercials on TV.