How to Win at Bingo?

Bingo is a classic game found both on our UK high streets and online. Having many similarities to a lottery really, just on a smaller scale, with more frequent, smaller wins and prizes. Each game will usually have a different range of prizes and ticket prices. This usually depends on the size of the bingo jackpot offered. When a player finds the selected numbers arranged on their card in a row, they call out “Bingo!“.  Since its invention in 1929, modern bingo (online bingo) has been a smash hit particularly with the USA and UK audience. But, it’s popular all around the world. The UK traditionally play 90 Ball Bingo. The USA version of the game is played with 75 Balls. There are 35, 40, 75, 80 and 90 ball versions of bingo today but they are all played in the same way so don’t worry. 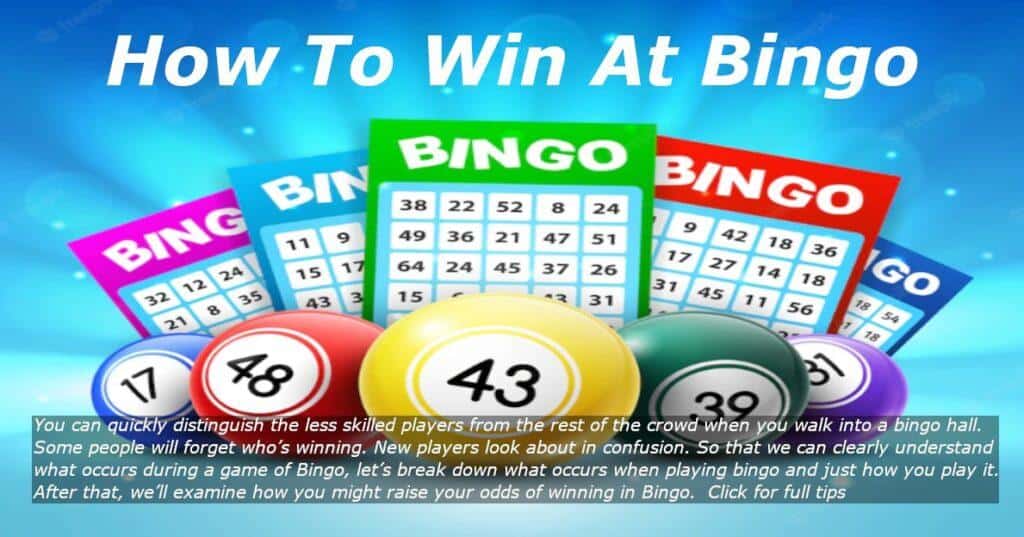 You can quickly distinguish the less skilled players from the rest of the crowd when you walk into a bingo hall. Some people will forget who’s winning. New players look about in confusion. So that we can clearly understand what occurs during a game of Bingo, let’s break down what occurs when playing bingo and just how you play it. After that, we’ll examine how you might raise your odds of winning in Bingo.

How to Win at Bingo?

A unique kind of lottery game is Bingo. In a standard bingo game, 75 or 90 numbers are used based on the numbers that are called out, and you must match a predetermined pattern of numbers. In contrast to the lottery drawings you see on television, where only a few numbers are drawn, the caller in a bingo game keeps drawing numbers until one or more players have filled out a particular pattern on their cards. The round is won by the first player to call “Bingo,” though occasionally, several players will simultaneously call “Bingo.”

Here are some strategies and a few tips on how you can boost up your bingo. Boost your bingo bankroll with a few easy adjustments to turbocharge your game.

1. Probability distributions are misleading and unimportant

When you look out for bingo tips, you’ll invariably come across articles covering L.H.C. Tippett and Joseph Granville and their advised techniques. Due to a problem that affects all probability-based gambling systems, these systems are, at best, suspect. The fault is also pretty straightforward. Probability distributions only provide information about past events over a specific set of experiments. The future cannot be predicted by any probability distribution. If that were conceivable, gambling games wouldn’t exist as they do now, or they would resemble nothing like the ones we like.

People choose a method and cross their fingers in the hopes that it works because they prefer to hang their hats on a post than toss them on the ground. Tippett and Granville offer the following advice on how to increase your chances of winning in Bingo.

You’ll find folks who swear by one, the other, both, or neither of the two techniques, but they’ll both “work” and “fail” on a completely random basis. That is essentially all there is to know about how probability theory applies to games like Bingo or others that depend on unpredictable outcomes. The results of games might theoretically be affected over time by very small influences. The person who mixes the balls could unintentionally prejudice the procedure. To find any significant bias, however, would require a highly powerful computer and numerous observations.

What can you do to increase your chances of winning at Bingo if you can’t tell which numbers will probably be called? Let’s start with the easiest ideas first and work our way up to the more complex ones.

Certainly one of those tips that make people roll their eyes. Everyone should be aware that adding more cards offers protection from called numbers. If you’re a new player, you won’t have the dexterity to keep an eye on all those cards at once. You need to practise this. Experts recommend that beginning players examine the games for a while before starting to play with 1-6 cards. As you learn the patterns and how to swiftly scan the cards, stick to a small collection.

3. A few casinos will inform you of the number of active cards.

When playing Bingo online, you can notice that X cards are active in one room while Y cards are active in another. Join a room where there are the fewest cards in play if you wish to play for a longer period of time. Other people may enter the area after you, and eventually, you’ll feel the want to leave for a room that’s less packed. Additionally, many jackpots are determined by the number of cards in play, so if you want to play for bigger jackpots, you might have to settle with more cards in play.

4 - The Cheaper Your Games Are, the More Cards You Purchase in Bulk.

Take advantage of any card discounts offered by a casino. By dividing the expense of purchasing cards over many games, you may stretch your budget further.

5 - Playing is best when there are fewer players.

Although the number of players does not directly affect the result of a game, it is less probable that any player will win fast if there are fewer players present. Therefore, unless everyone is playing 20–30 cards, extended games are more likely to occur in a small group.

6 - Some online casinos let you play real money bingo for nothing.

You can locate online casinos that will give you small amounts of “house credit” as “no deposit” bonuses when you register if you’re not ready to risk a lot of money playing Bingo. Although there are some restrictions on these tiny numbers, it is preferable to practise with someone else’s cash when you are just getting started.

You don’t have to socialize to participate in an online chat room, but the moderator might occasionally provide unique incentives. Only participants in the discussion who are engaged can win them.

8 - Change your cards according to your preferred number distributions

You usually have the choice of trading cards or picking a different card to begin with if you want to try Tippett’s or Granville’s method of playing Bingo. To recognize the number distributions you want, you’ll need to practise scanning bingo cards.

10. Keep your bingo supplies organized and prepared to play.

11 – What Is Special About USA Style Bingo Play?

Compared to UK-style play, US-style play provides for more winning sequences. On just one card, the patterns must be created. Games may result in more than one winner since different patterns may be permitted. US bingo players have created their own bingo lingo.

12 – What Is Special About UK Style Bingo Play?

Bingo venues in the United Kingdom prefer the 90-ball game. The numbers are arranged on cards or tickets in three rows of nine columns each in the UK version of the game. There is a set of numbers assigned to each column (1 to 10, 11 to 20, 21 to 30, etc.). To ensure that each of the 90 numbers appears on at least one of the six tickets, tickets are printed in groups or strips of six. Wait for the caller to say “Eyes down” for the game to start.

Frequently Asked Questions and Where to Play?

How much can you win from bingo?
Bingo cash prizes vary from site to site. There are certainly some big cash pots on offer for a few lucky players. There are lots of smaller cash prizes too. Generally, prizes range from a few hundred to a couple of thousand quid. Although special prizes for national games can exceed six figure sums.
What is the best time to play bingo?
The early bird catches the worm. Luckily so does the night owl. 5am is usually the start of the day’s bingo rush. 9-5 is generally quiet. So can be a good time for those of us not at work. Early evening is a popular time to play. But 10-11 pm onwards through to the early hours is a great time to benefit from quieter rooms.
How much are bingo tickets?
Bingo can be played for as little as a penny! Gamesys sites have free daily play available and tickets prices range from a penny to 20p or try session bingo where you can buy a bundle of Bingo tickets for 15 different games. That’s a whole hour of bingo for just £5.00. Gala Bingo tickets typically range from a penny to 50p per ticket and Mecca tickets cost between a penny and £2.50 but cash prizes are regularly up to 20k on the higher priced games.
How many bingo cards should I buy?
The number of bingo tickets you buy should be affordable but not exceed your ability to cross off the numbers in due time. The more tickets you hold the better your chance of winning the game but how quick are you with the dabber?
Where to play bingo online?

There are plenty of bingo sites to play at online. Look at our E-Vegas.com 2022 bingo hot picks.