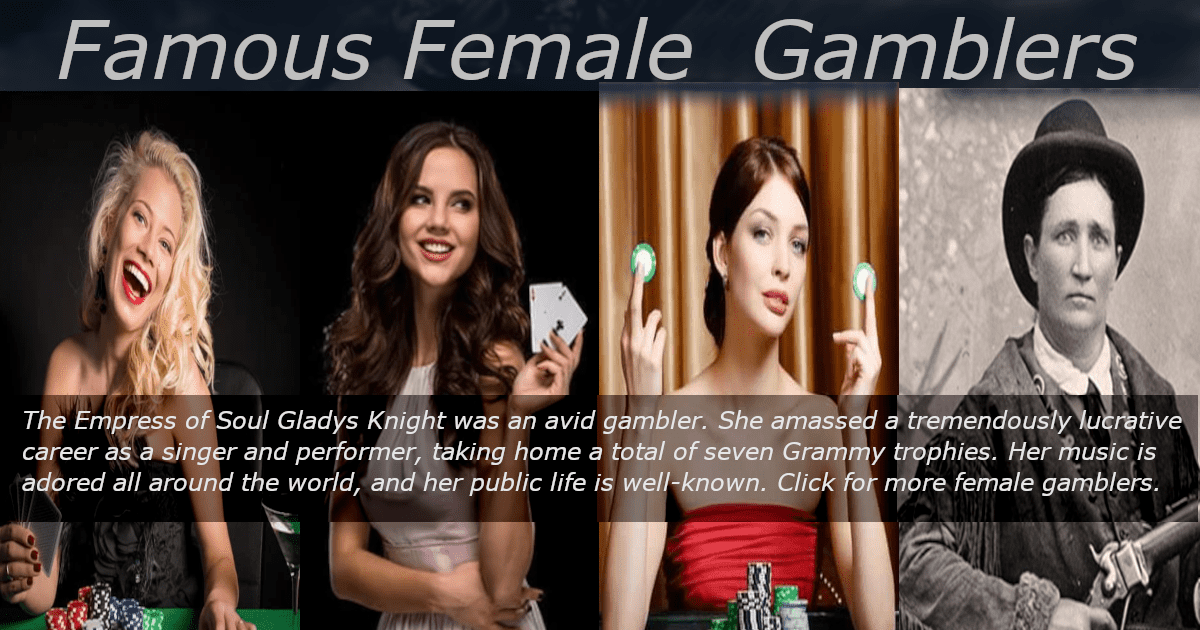 The Empress of Soul Gladys Knight was an avid gambler. She amassed a tremendously lucrative career as a singer and performer, taking home a total of seven Grammy trophies. Her music is adored all around the world, and her public life is well-known.

Few people are aware that Knight spent a whole decade leading a covert life as a highly successful gambler, focusing almost entirely on the games of Baccarat and Blackjack. Her memoirs goes into great detail about her time as a gambler and how she felt safe and protected at casinos, which kept her playing and returning.

Although Alice was born in England, she later moved to America. She initially met Frank, her first husband, in Leadville, Colorado. She started playing poker to support herself when her spouse was killed in an accident and discovered she was quite talented. People would travel from all around to see her play poker or to challenge her if she gained a reputation for it.

Taiwanese-American professional poker player Maria Ho. She has participated in a number of live poker events, such as the “World Series” and “World Poker Tour” and others. Ho was honoured in 2019 by being admitted into the Poker Hall of Fame’s Women in Poker Hall of Fame.

Her estimated net worth at the time this article was written was $4,408,407. Maria Ho works as a commentator and television host in addition to her poker profession. Since we brought up television, we advise true poker fans to check out our list of the top poker movies.

On July 9th, 1984, Vanessa Selbst was born in New York. Selfie attended Yale University, one of the Ivy League schools, and earned degrees in political science and law there. With a net worth of around $12 million, Vanessa Selbst is still the wealthiest professional female poker player.

Three World Series of Poker bracelets belong to Selbst. She’s won numerous competitions which include two straight victories from the Mohegan Sun North American Poker Tour (2010 and 2011). They obtained $1,200,000 in total for her. However, the enormous $1,800,000 she won in the 2010 Partouche Poker Tour Cannes Championship was her largest win. Selbst no longer plays and is retired today.

One of the top British women’s poker players is Liv Boeree. On July 18, 1984, she was born in Kent, England. She earned a physics and astrophysics degree with honours from the University of Manchester. Boeree’s participation in the 2005 television episode of Ultimatepoker.com Showdown helped her achieve fame. She continued on to win events including the 2010 European Poker Tour main event in Sanremo and the 2008 Ladbrokes European Ladies Championships.

At a World Series of Poker tournament in 2017, Boeree took home a bracelet. The estimated value of her poker winnings is $3,861,839. She co-founded the nonprofit group Raising for Effective Giving in 2014. Its goals are to encourage ‘effective altruism’ and provide guidance on which charity to support. The organisation has already raised more than $14,000,000.

Judy Bayley is a woman who deserves a lot of credit in the gambling industry, despite having a less well-known name. She is referred to as the First Lady of Gambling. In 1956, Judy and Warren Bayley founded the Hacienda Casino, which is situated halfway between Las Vegas and Los Angeles.

She became the first woman in Nevada history to own and run a casino alone after her husband passed away. She was the first to introduce Live Keno, a well-liked lottery-like game in the US, to the Las Vegas Strip, which was only one of her numerous accomplishments.